This blog has moved to http://ThePowerShellGuy.com Greetings /\/\o\/\/


I found a blogentry about a Msh IRC bot some time ago here :

and now I found an updated version here :

I for this Demo I added this piece of code to it, to make a !do command available next to the !say Command. :

for the rest I just changed the Server and IRC channel, and started it up.

I started up mIRC and joined the channel,
now I could give Commands (!say or !do) in the channel and let the Bot do things like this : 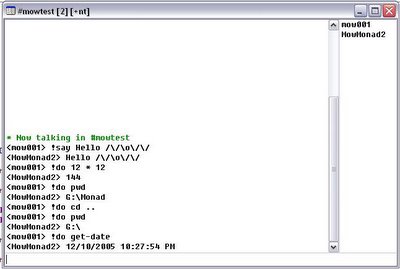 *Warning* As you might understand, this is a very unsecure way to feed commands to MSH !, as anyone in the channel has acces to you computer trough this,so DON'T use this "as-is" as your "MSH" remoting solution !
(also the output has some limitation as you see when you play a bit more with it)

As said be very carefull with it, but still I think this is very Cool.